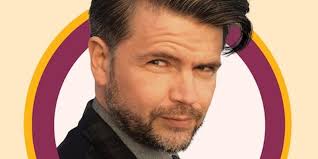 Trevor Lock first went on the telly with Lee and Herring and on tour with Stewart Lee. He starred in all three series of Channel 4’s British Comedy Award winning, BAFTA nominated Star Stories, wrote two plays for Radio 4 and once addressed the Oxford Union on the meaning of life. True stories, one-liners, flights of fancy and plausible theories, all went into his stream of consciousness freestyle stand up. The Scotsman once described him as ‘Funny, moving and clever.’ TimeOut, simply as ‘hilarious’ and culture website Spoonfed thought he could ‘probably win an award for the most laughs in a minute.’ The Sunday Times wrote of the ‘superbly comic writing’ of his plays on the Edinburgh Fringe. Then along came Trevor Lock’s Community Circle. A two hour “social experiment” in which there are no jokes and no actual content and which seemingly doesn’t even begin. In their respective 5 star reviews Community Circle has been described by The Daily Mirror as ‘The most fun you can have without taking your clothes off’ and in The Scotsman Kate Copstick wrote that it ‘blew me away … a masterclass in comedy performance’.